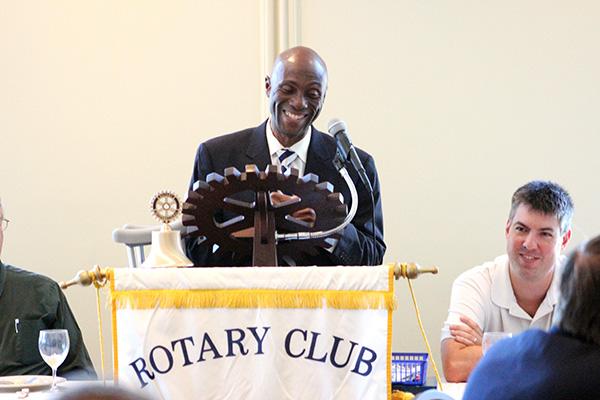 He began with the campus’ history from its founding as a forest academy in 1903 to its becoming a full-fledged Penn State campus in 1963. He described the students who attend the campus and noted the campus’ economic impact in the region. It spends more than $2.5 million, in addition to nearly $8.4 million in student spending, and about $8 million from out-of-state visitors to the campus, according to a 2008 study.

Achampong highlighted several initiatives at the Mont Alto campus, including a new summer program, PaSSS, which will allow selected students to complete a semester of college at half price; the launch of a Veterans’ Mentoring Program; efforts to raise international awareness through a newly established International and Intercultural Programs Office (IIPO); recent student and faculty engagement within the community; and the possibility of a establishing a space in downtown Waynesboro to help bring student and faculty research to market.

This spring, 30 students are being selected to participate in PaSSS, a program that will award each participant a $1,500 scholarship to take up to six credits of general education courses during the summer. They will also receive a $400 book stipend and be offered a 20-hour-a-week job on campus or with a local nonprofit for a total of 100 hours at $10 an hour over a five-week period.

“This program demonstrates Penn State’s commitment to making a Penn State education accessible and affordable to students by reducing the cost and time to their degrees,” said Achampong.

“Penn State Mont Alto continues to live its mission of being a land-grant institution through community engagement — something Rotary really values,” said Achampong. “Many people on campus serve on a myriad of boards and our students are also engaged.”

Achampong is hopeful that the campus will be granted the funding for Innovation Crossroads — a project that will bring student and faculty research to market in collaboration with local businesses.

“Penn State does about $800 million in research every year,” said Achampong, “and President Barron has put $30 million aside in an initiative called Invent Penn State that includes seed grants for Commonwealth campuses to promote entrepreneurship.”

Achampong has already secured a space in the Landis Complex in downtown Waynesboro thanks to D.L. George & Sons and, if the grant is approved, will look for business sponsorships to provide a stream of income long term.

“We don’t want to be a hidden gem,” said Achampong. “Now you have a better idea about the good things that are happening at Penn State Mont Alto.”