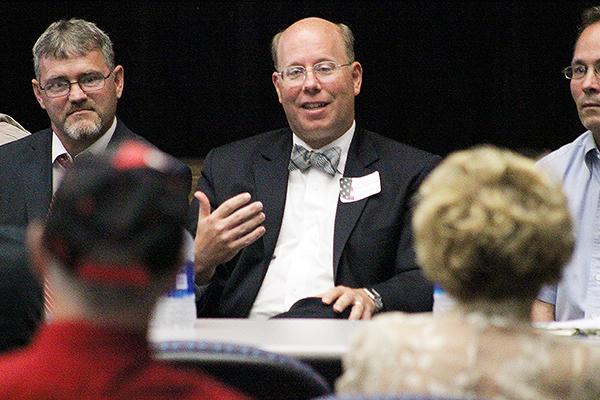 State Rep. Paul Schemel discusses the importance of respecting his political opponents during an open forum with legislators from the quad-state region and Penn State Mont Alto students and faculty members on Aug. 26.

“It is unusual to have the opportunity to meet legislators face-to-face where you can have an exchange of ideas,” said event moderator Kira Hamman, Penn State Mont Alto instructor in mathematics and Honors Program coordinator.

The forum followed the annual Quad State Legislative Conference, which was hosted on campus by state Rep. Paul Schemel, a former instructor and member of the Penn State Mont Alto Advisory Board. The conference brings a dozen or more state legislators together from Pennsylvania, Maryland, West Virginia and Virginia to learn how similar issues impact other states, and where they can share policy initiatives.

“As strenuously as you might be arguing your point on the floor of the House, when you leave, you have a level of respect for your opponents as individuals,” said Schemel.

State Rep. Dan Moul agreed. “Politics is built on relationships, so you have to work through differences to get the work done.”

“You learn to agree to disagree because you might need your opponent the next day," said Del. John Overintgon, of West Virginia.

“Now we have a culture to damage the other side,” said Michele Jansen, director of legislation and policy for Pennsylvanians for Right to Work. “When you are trying to persuade somebody, one of the biggest mistakes to make will be to go down that brutal road.”

Moul urged the students to increase their vocabularies and develop good communication skills. “So when you have something to say, you can be heard,” he said.

During the forum, the legislators also touched on the topics of preparing legislation, the role of social media, and the growing perception that the political system has been lost.

“Hitting upon the view that we are unraveling as a society,” said Overington, “while we all agree on national issues such as defense, we don’t agree on a lot of the personal issues that government is involved in.”

Moul compared today’s political environment to that of 1863. “Half want to go one way, half want to go the other way. … We need to use the Constitution as our guide,” he said.