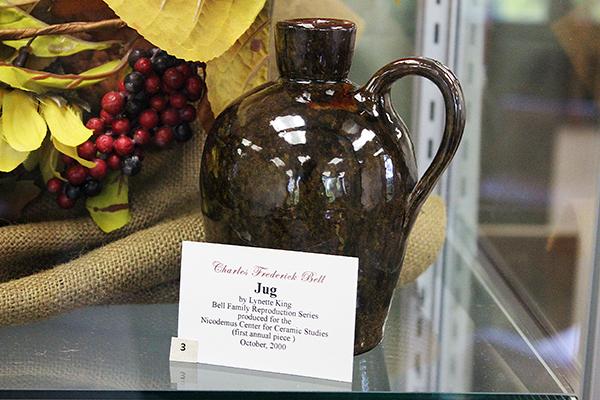 MONT ALTO, Pa. — The Nicodemus Center for Ceramic Studies (NCCS) is exhibiting several John Bell reproductions from its Bell Commemorative and Annual Bell Family reproduction series throughout the 2016 fall term on the second floor of the Penn State Mont Alto Library. Members of the community are welcome to view the display from 8 a.m. to 10 p.m. Monday through Friday, and 4 to 10 p.m. Saturday and Sunday. Images of the exhibit can be viewed here.

“The Nicodemus Center was created to preserve and interpret the historic folk potteries of the Cumberland and Shenandoah valleys,” said NCCS Executive Director Mary Ashe-Mahr. “Displaying the John Bell Commemorative Series and Annual Bell Family reproductions in the library reinforces our commitment of preserving and exhibiting historic folk pottery.”

The NCSS not only preserves the legacy of John Bell and other historic folk potters but also conducts monthly workshops for students at its Mont Alto pottery studio on the University’s campus and offers a variety of workshops at its second studio, The Ceramic Arts Center, in downtown Waynesboro.

“An additional component of our mission is to provide a well-respected ceramic arts program that we are continually developing to fit the needs of our community,” said Ashe-Mahr.

The NCSS is named for the late Emma Geiser Nicodemus, who established Renfrew Museum and its historic folk collection of the Bell family pottery as a bequest to the people of Waynesboro. Since its inception, NCCS has mounted 12 major exhibits (featuring the works of 42 historic folk potters) and conducted archaeological excavations of the John Bell and Daniel Baker Pottery Shops. A permanent collection of the historic folk pottery is also located on third floor of the Penn State Mont Alto General Studies Building.

Under the direction of former executive director James Smith, The Bell Commemorative Series was begun in 1997 as a five-piece set commemorating the 100th anniversary of the closing of Bell Pottery in Waynesboro in 1897. Ceramic artist Lynnette King created the first piece, a small jug bank, in a limited edition of 250, which was part of a major historic folk pottery exhibit, Bell & Sons, that was mounted at both the Renfrew Museum and in the lobby of what is now M&T Bank in Waynesboro. She continued the reproduction series in 1998-1999 with five original John Bell pieces in a limited edition of 250 each.

In 2000, the NCCS started its Annual Bell Family reproductions to raise funds with a limited edition of 250 and later lowered that number to 100. Ceramic artists have included King, who did the first four, Jack Handshaw, contributed numbers five through seven, and James Smith completed eight through fifteen. The reproduction series will resume this year with ceramic artist Mike McIntyre.

Twelve pieces are on display in the Penn State Mont Alto Library. Some include the following:

The NCCS hosts pottery classes and workshops at the Ceramic Arts Center, located at 13 South Church Street in Waynesboro, including introductory pottery classes, a children’s class, and “Corks and Clay” workshops specializing in creating hand-built projects. In addition, patrons can purchase guild-member pottery in the center’s retail store. To find out more about the center, go to www.ceramics-nccs.org.

For more information about the exhibit, contact Mary Ashe-Mahr at [email protected].