Science, technology, engineering and mathematics campers gain experience on and off campus 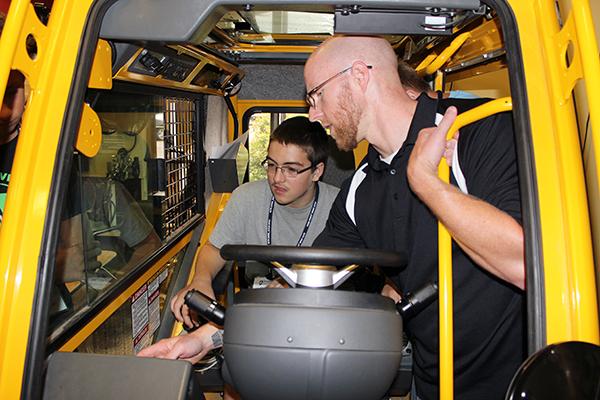 MONT ALTO, Pa. — Last year’s inaugural STEM Camp at Penn State Mont Alto was an overwhelming success, but camp organizers wanted to take it to the next level.

After polling last year’s students, camp was expanded to offer activities and field trips beyond the college campus, according to camp coordinator and continuing education director Helen McGarry.

“This is an exciting and unique opportunity for students with a love of science and technology to immerse themselves in a STEM-filled week of fun and educational learning — on and off campus,” said McGarry.

Camp featured activities in designing a weight-bearing bridge using engineering software; challenging other teams in a Lego Mindstorms EV3 competition; investigating the world of microbiology; exploring the mathematical probability of the odds of winning; and more.

While the “home base” for camp was still Penn State Mont Alto, this year students were transported to two field-trip locations to expand their STEM horizons.

“The students are seeing the principles that they learn in the classroom in action,” McGarry said. “The more we can partner with local industry — the more it strengthens our program.”

“They are the next generation. We want to see students get excited about engineering technology. It’s a great world to be in — it’s diverse, and you never get bored,” Peiffer said.

Careers in STEM are exploding and the goal of STEM Camp is to pack as many learning opportunities in a week’s time as possible, McGarry said.

Employment in occupations related to STEM — science, technology, engineering and mathematics — is projected to grow to more than 9 million jobs between 2012 and 2022. That’s an increase of about 1 million jobs over 2012 employment levels, according to the United States Department of Labor.

Spencer Woodring, a ninth-grader at Greencastle-Antrim High School, said Manitowoc was one of his favorite parts of camp.

“I really like building and engineering,” he said, after sitting in a crane cab simulator.

Learning from a female engineer at Manitowoc was very inspirational for Aspen Bubak of Chambersburg, Pennsylvania. Aspen will be attending ninth-grade at Chambersburg Area Senior High School in the fall of 2017 and has her sights set on a STEM career.

“I liked everything about camp, but I really liked the trip to Manitowoc. It was really cool to learn how all the cranes work and seeing what the engineers actually do is quite interesting to me,” she said.

Despite all the STEM knowledge that Memphis Elliott, of Newville, Pennsylvania, gained during his week at camp, he enjoyed the friends he made the most.

“You can learn a lot of new things about microbiology and stuff like that, but if you want to meet new people with similar interests and you want to figure out what to do with your future, come to STEM Camp — it’s awesome!” Memphis said.