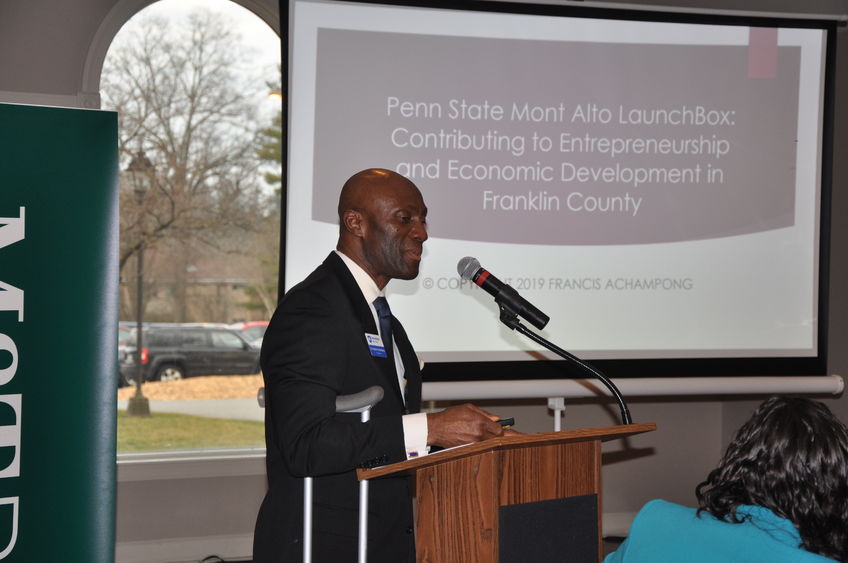 Achampong presented the highlights of the Penn State Mont Alto LaunchBox, an initiative of Invent Penn State which was launched in 2015 by Penn State President Eric Barron. Invent Penn State is a $30 million initiative redefining the University’s land grant mission to include entrepreneurship and innovation, programs, tools, and resources that accelerate the movement of great ideas to the marketplace.

“Through the Mont Alto Launchbox, Penn State Mont Alto hopes to provide leadership and serve as a catalyst for entrepreneurship and economic development in Franklin County,” Achampong told the chamber members at Thursday’s event.

Since its inception in 2018, the Mont Alto Launchbox, 40 N. Second St., Chambersburg, Pennsylvania, has provided workshops for 42 people, helped seven existing businesses through advice and referrals, and facilitated the launch of three businesses.

“The LaunchBox provides resources and support to entrepreneurs in a free, coworking space to help early-stage and more advanced startups build a sustainable business and a viable plan for growth. Our goal is to inspire and motivate aspiring entrepreneurs across the commonwealth,” Achampong said.

“You don’t have to have a fully formed business model in place before you seek out the LaunchBox. We want to avail our expertise and resources to anyone who is interested in launching a product, business, or service in the community,” Achampong said.

The Mont Alto LaunchBox is one of 21 innovation hubs across the commonwealth offering free services to entrepreneurs. For more information about LaunchBox workshops and services, go to montalto.psu.edu/launchbox.

During the awards presentation Penn State Mont Alto Chief Academic Officer Michael “Mike” Doncheski was presented with the Volunteer of the Year Award.
He was introduced by chamber president Stephen Christian.

“Mike is a humble, diverse and well-rounded person who gives of his time on a weekly basis behind the scenes to support the endeavors of our community and the work of the Chamber Foundation. Thank you, Mike for all you have done and continue to do,” Christian said.

Doncheski also volunteers on the Scoop-a-Palooza Committee and the Community Education Coalition.