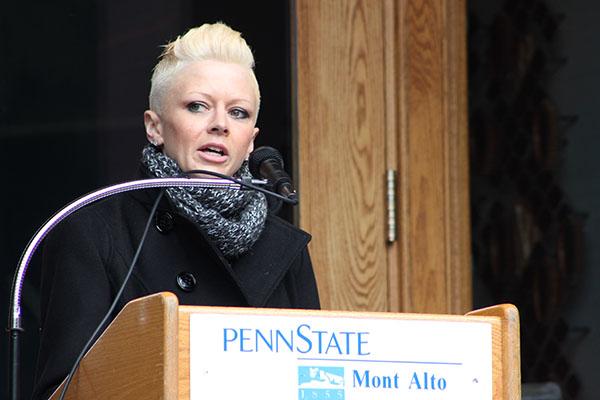 Veteran Laura Wilkinson (Ret., US Army) was the featured speaker during Penn State Mont Alto’s Veterans Day event on Nov. 11, when members of the campus community gathered at the Penn State Mont Alto Veterans’ Memorial to recognize and honor the veterans and their families whose service has allowed our nation to live in freedom and preserve our way of life.

“God only gives the toughest battles to the strongest soldiers,” said Wilkinson who is a disabled veteran and a Penn State graduate. After six years of service, she was honorably discharged in 2007 having served in South Korea and Iraq’s Sunni Triangle in support of Operation Iraqi Freedom II.

Chancellor Francis Achampong welcomed the crowd and shared some of Mont Alto’s military history, and said “The tradition to support veterans at Mont Alto continues today.” He mentioned that the University is a signatory of the Education Pillar of “Got Your 6,” the “8 Keys to Veterans’ Success,” and participates in the “Principles of Excellence.”  He also noted the dedication of the Penn State Mont Alto Veterans’ Memorial in 2012, which was largely funded by the Student Veterans Association (SVA), and the opening of the Veterans Center in 2014. Today, 48 student veterans attend Mont Alto.

Benjamin Stephey, Penn State Mont Alto’s SVA president and U.S. Army veteran, recognized the veterans in attendance and introduced Wilkinson by saying, “She is a veteran, a college graduate, a wife, a mother of four, a motivational speaker, and a cancer survivor…Saying she is a fighter might be putting it lightly.”

During her speech, Wilkinson touched on the importance of recognizing members of the military and veterans, the social stigmas of being a female soldier before and after service, and what being a veteran means to her.

She said one of her most moving moments occurred when a 4-year-old boy recognized her service with a salute while many others strode quietly by her as she walked through an airport making her way home for a leave of duty.

“He stood as tall as he could be, squared his shoulders and saluted me,” she said. “He looked at me as if he was looking into the eyes of his favorite super hero.”

Wilkinson said being a veteran means having had the honor “to serve side-by-side with my brothers and sisters…It means honor, courage, sense of pride and strength.”