The Outstanding Senior Award, sponsored by the College of Agricultural Sciences Alumni Society and the Coaly Society, honors the senior who best balances outstanding academics, extracurricular activities, work experience and communication skills. Candidates are selected based on resumes, grades, interviews and a short essay.

James Frisbie, who was named Outstanding Senior, graduated in May with a 4.0 GPA, a major in immunology and infectious disease and a minor in bioethics and medical humanities. As an undergraduate, he participated in research, wrote an honors thesis on the enzymatic synthesis of a metabolite shown to have anti-leukemic properties, and shadowed physicians in various fields for more than 150 hours. He will begin medical school at the University of Maryland in the fall of 2017.

Frisbie has received several awards over the course of his academic career. He was the College of Agricultural Sciences' veterinary and biomedical sciences student marshal and recipient of the John White Graduate Fellowship Award in 2017. He also received the William D. and Clara Calhoun Phillips Scholarship, the Evan Pugh Scholarship, the John T. and Janet Zerbe Ag Sciences Scholarship, and the Theola F. Thevaos Memorial Scholarship. He is a Schreyer Honors Scholar and a member of Phi Kappa Phi Honor Society. He was crowned Penn State's 2016 Homecoming King.

As drum major for the Penn State Marching Blue Band, Frisbie entertained thousands at Penn State football games, arranged music for the trumpet section, led marching and musical instruction, and acted as a liaison between band members and staff. He was co-founding treasurer of the Penn State Music Service Club, a club that performs at nursing homes, and at LifeLink PSU, an organization for young adults with special needs.

In his senior year, he tutored LifeLink students and served as a lifeguard at the Natatorium and White buildings on the University Park campus. Frisbie was a participant in THON, the IFC-Panhellenic Dance Marathon, serving on two dancer-relations committees and one special-events committee during his undergraduate years.

Joshua Lemons, from Greeley, Colorado, was awarded the Golf Course Turfgrass Management Program Award and earned his degree in the subject in 2017. He also holds a bachelor's degree in cross-cultural studies from Bethany Global University in Bloomington, Minnesota. Prior to attending Penn State, Lemons worked at the Minnesota Valley Golf Club under the supervision of Penn State alumnus Michael Browder.

As part of his Penn State studies, Lemons completed an internship at the renowned Merion Golf Club near Philadelphia with another University alumnus, Matthew Shaffer. Lemons has accepted a position at the Golden Valley Country Club in Minneapolis, Minnesota.

Jeremy Newman, a Gettysburg native, received the Forest Technology Program Award. Newman earned an associate degree in forest technology from Penn State Mont Alto in May 2017, and will continue his education in forest ecosystem management next fall at University Park. At Mont Alto, he was president of the Forestry Club and a member of the Woodsmen Team.

Newman is an Eagle Scout, has worked as a field interviewer for the Pennsylvania Visitor Use Monitoring Project and conducted the Solder's National Cemetery Trees Project in Gettysburg. He hopes to attend graduate school after earning his bachelor's degree.

Chelby Sherwood, of DuBois, was named Outstanding Student in the Wildlife Technology Program. Sherwood graduated in May with an associate degree in wildlife technology. In the summer of 2016, she completed an internship with the Pennsylvania Fish and Boat Commission and the Jefferson County Conservation District, collecting data on adult channel catfish presence, eggs and fry. 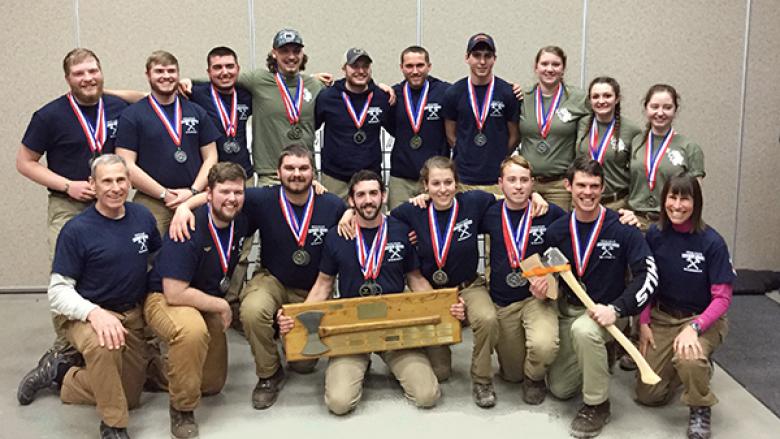